The proposed redevelopment plan will expand the Bahia Hotel’s lease space to include the end of Bahia point and the public access road (Gleason Road) to the point.  The redevelopment plan calls for the removal of Gleason Road and the implementation of a narrow bike path to the point, which will substantially impact accessibility and use of Bahia Point by the public, essentially making Bahia Point a semi-private beach.

note. We are not against the expansion in general, and acknowledge the positive contributions the Bahia Resort has made to the city and its residents over the course of its history. However, the plan that is proposed has several negative impacts on San Diegans and users of Mission Bay. They include:

Denial of Public Access for Private Gain
Eliminating Gleason Road and vehicle access along Bahia Point will effectively make the peninsula a private beach for hotel residents. Much like on the western side of the peninsula where the hotel has planted thorny and obstructive plants and trees to block/discourage public from the beach, the north and east side will no longer be as accessible to visitors who drive to the bay. Expansion plans call for a parking lot at the base/beginning of the existing road, which means users would have to walk from the lot with their items to enjoy the picnic tables, grassy areas, bonfire pits and beach that stretches to the north, as well as gain water access. Important usage, and the diversity of uses for this public land will be lost. 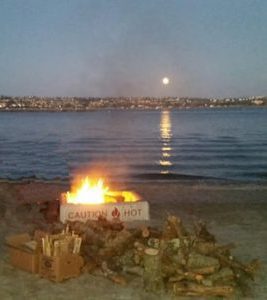 Process, Procedure and City Policy Violations
We are concerned about the blatant disregard by the Park and Recreation Department of City Council policy 600-33 for major park projects. The process for the presentation and initial approval of the redevelopment plan is not consistent with Council Policy, CP-600-33, dated January 28, 2016, which dictates that public notification and input for city-wide park development projects are to “preserve, protect, acquire, develop, operate, maintain and enhance public recreation opportunities and facilities throughout the City for all users.” The Council Policy emphatically dictates that the public must have adequate advance notification and opportunity to participate in the input process of projects.

To date, there have been no opportunities for public input or workshops regarding the proposed redevelopment plan. The redevelopment plan was the only voting item at the January 2, 2018 Mission Bay Park Advisory Committee meeting. Despite the short notice and the proximity of the meeting to a holiday, there were more than 150 concerned citizens in the audience to protest the redevelopment plan (see picture below).  The public testimony lasted for more than an hour and highlighted concerns from a vast array of public users.

a) The Project Manager conducts the Public Workshop(s) and is responsible for:

Other government and council group meetings are required to move forward, and we are concerned about public notice and agendas not being issued for these as well in an attempt to fast-track approval.

Inadequate Environmental Review
We are concerned that the City’s proposed environmental review, which consists of an addendum to the 1994 Environmental Impact Report (EIR) for the Mission Bay Master Plan, will not adequately address all impacts resulting from the proposed Bahia Development Plan. In addition to traffic, water quality and public safety we are particularly concerned that the environmental review may not adequately address the proposed development’s adverse impacts to public access to our park lands and coastal water.

The proposed project is eliminating the ability of small water craft users to unload their water craft (paddleboards, windsurf boards, kayaks, canoes, surf-ski’s, etc.) and eliminating the ability of traditional picnickers to unload large tents, coolers, etc. adjacent to the grassy area. This is in direct conflict with the Mission Bay Master Plan requirements as cited above. In the submission to the City, the applicant is proposing to “mitigate” the loss of all access needs by small water craft users and picnickers along Gleason Road by constructing a ten-foot-wide pedestrian/bicycle path and constructing approximately 18 new boat slips on the west side of the hotel.

The path is proposed to offset removal of the road, but the Master Plan does NOT call for a ten-foot-wide bike path around the point, which Bill Evans proposes to build. It calls for bicycle ACCESS around the point. This was hard-fought language. “Access” is defined more loosely than “path,” and could include a shared bicycle/vehicle route (ie Gleason Road) and a bicycle/pedestrian route along the western edge of the hotel. All they need to do is take out a few bushes and add the small missing piece. Instead they want to remove the public road altogether. 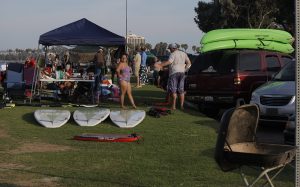 Potential Loss of Emergency Vehicle Access
The proposed hotel redevelopment is going forward City Council approval without review by either the Fire Department or Lifeguard Services. The elimination of Gleason Road raises questions about the ability of Emergency Services to access both the Hotel and park  in this location.

One of a kind location. No other place like it!
Bahia Point and Gleason road are a one-of-a-kind location and a true asset to the visitors of Mission Bay.

Traffic and Crowding
Expansion plans include an increase from 350 to 600 rooms. We are concerned the impact of this increase will further compromise the area’s enjoy-ability as folks come and go to enjoy this portion of Mission Bay. We are concerned that the redevelopment plans cram the public into other areas of the Bay while making the rest of Bahia Point inaccessible to those driving in.

Other Areas of Mission Bay Impacted
The redevelopment plan not only impacts Bahia Point but other areas of the bay, including Ventura Point and Bonita Cove, where additional grassland will be removed to increase public parking lots to offset the loss of parking on Bahia Point. Less grass for picnics, parties and games.

Parking Woes
Plans to eliminate the over 250 existing parking spots in this area is being offset by three parking lot creations. However two these lots are scattered elsewhere along Mission Bay (creating crowding and density on the beach and water in those areas), while the Bahia Point proposed lot only accommodates 100 cars. Plus it can be expected that hotel employees and private guests would utilize these nearby spots as it will exist on Bahia Lease Property.